The image above was posted by Peter Franzen on instagram . “Gurra on the set of Vikings with Jasper Pääkkönen and Peter Franzen.” Gustaf Skarsgard is in the middle. The photo was from behind the scenes of the Vikings season 4 finale. Love seeing the tough vikings enjoying ice cream! Can’t wait for season 5. Cant wait to see Gustaf as Floki in the new season. He’s always been great to fans.

Image  was during a press tour for Vikings.Gustaf was alll smiles! (he loved the Hammarby soccer t-shirt the photographer was wearing) . Season 5 will bring fans more on the conflict that was built up in the last episodes of season 4. Showrunner Hirst commented by Hirst to an online magazine Variety: “Viking society is all about winning and being famous, and it’s very aggressive and ambitious, so you kind of know they’re going to be in conflict with each other” and also added that: “To be a son of Ragnar [is] the biggest calling card in the Viking world. Almost immediately after they succeed in revenging their father, they pave the way to, essentially, world war.” 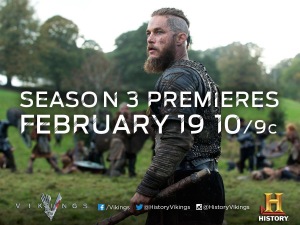 TV Line revealed some NEW cast photos, some teaser trailers and a little preview at what we can expect
in Vikings Season 3!

END_OF_DOCUMENT_TOKEN_TO_BE_REPLACED

Vikings fans were treated to an amazing fan experience this year at Comic Con in San Diego. This year fans were able to be photographed and videos into a Vikings scene. The images below show some of the behind the scenes for this experience:

The wardrobe and makeup:

These fans dress up in vikings clothing and cheered on the fans waiting for their chance to go through the experience:

The shield maidens were amazing:

The gallery below shows the cast in attendance greeting fans and signing autographs. Huge thanks to History Channel and PR personnel for the amazing behind the scenes tour!

This fan site is in no way affiliated or linked with "Vikings" show, cast, their management or anyone affiliated with the show. This website was created for entertainment value only. If there is any content on this website that you feel violates your personal property/copywright, please let us know and it will promptly re-credited or removed.

Images and information on this site are not posted for commercial gain, and are used under the 107 Limitations on exclusive rights: Fair use Law 107. All images and information are property of their respectful owners. This site does not claim any copywrights, no infringement intended.